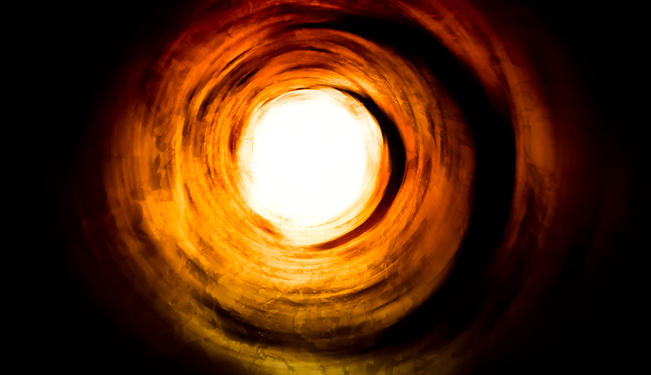 An octogenarian muses on various theories on death and why none of them seem to hold water.

I am not greatly interested in the afterlife. Whether or not there is one is unknowable, and bothering about unanswerable questions is not useful. I am though very interested in profound unanswered questions. We know some things for certain but not why. Newton was never going to see an apple defy gravity and fly into space, though not because every apple always has fallen. No one has the answer but an answer there must be.

I shall find out if there is life after death soon enough. Nevertheless in advance of that I can point out some of the problems an afterlife would have to resolve and some probable constraints. This applies to the Christian concept of the afterlife and I suppose essentially to the Judean and Moslem. Other religions may have very different notions.

First of all there is the matter of a personal God, one that marks the fall of a sparrow. The concept just does not fit with a universe created by a big bang some incredible number of years ago with suns in untold numbers receding at vast speeds into ungraspable distances. If there is something that, for want of another word I’ll call god, he, or rather it, is a force, a sound, an “oom”.

To look at the matter on the human scale, a personal god might make sense if the world was created in six days not so very long ago, and humans made a special class distinct from the rest of life with a right to dominion. “For though hast made him a little lower than the angels.” As Darwin realised, evolution scuppered that notion. There is nothing unique about man. Why anyway should God mark the fall of a sparrow? Its fall is just part of the evolutionary struggle. That concern might redound to God’s credit but does not do the sparrow much good.

I suppose one might argue that there are criteria that separate man from the rest, like memory and self-awareness, speech and writing, literature and science. Although those apply to man, they do not apply to every single human being. Many are illiterate, a few have no short-term memory, and some are suffering from conditions that make them “scarcely human”, though human beings they still are. Going back in time, is Neolithic man to be included but not Paleolithic? And are we completely sure that the dumb creatures are all as dumb as we think them to be? There is a border collie reckoned to have the understanding of a two-year-old. Certainly I’d be pleased to see my first dog, the awful George, far more than many people I have known. But then perhaps those unpleasant characters would be in the other place.

That brings me to heaven and hell. The division though seems rather simplistic; we are most of us borderline cases. Even the most seemingly worthy may suffer from impure motives- “to do the right thing for the wrong reason”. The Day of Judgement, that great examination room in the sky, is pass or fail; not much compassion around. Even if you get in, it would seem you spend eternity telling God how marvelous he is. Doesn’t attract me. He seems to be an insecure fellow always demanding that everyone is constantly reaffirming their belief in his greatness and power, a personality cult taken to the extreme.

Then who of the many “mes” might survive? The rather angelic three-year-old with the mop of red curls in the photograph on the study wall, or the crotchety old fellow typing these words? Is it the person at the time of death? Few of us are at our best on our deathbed. Perhaps one ought to throw oneself under a bus at say 35 to ensure that you spend eternity in good nick. It would seem hard that if you died very young you might have to spend eternity in nappies. The best you can hope for is the Angel Gabriel bending over you saying “Coo, coo, coo” until the end of time. The Catholic view of the matter seems particularly harsh. If you die before your parents can make it to the font- perhaps the car ran out of petrol- the best you can hope for is purgatory. On the other hand, if you have the foresight to arrange for absolution before you pass-on – or over– you should be all right.

The matter of which me is the real me, is insoluble. I am different from every other creature that has ever lived. However, that is not just my genes but also the time I have lived in and the things I have experienced; it is a reciprocal – or interactive -affair. It seems to me that Kant got it the wrong way round; I am therefore I think and my thoughts are more “me” than anything else, but in another society, in another age, I should have thought about different things or thought differently about the same things. So who is the “I” that might be saved – or damned?

If God has ordered existence why has he made it so painful? If there is a God or gods, the Greeks’ concept seems to accord with reality more than does the Christian. The Greek gods are like a bunch of unpleasant and malicious schoolboys, the sort that like pulling the wings off flies. They are always lurking with the stuffed eel-skin ready to wallop you when you least expect it. Life is like that. With that lot, as with Macbeth’s witches, you need to read the fine print. What benevolent deity would decree that most of us should end physically decrepit, incontinent, often in chronic pain, with failing sight and hearing, and fading mental powers? Those of us who avoid this unpleasant and undignified end are indeed the lucky few. I do hope I shall be one of them.

I do not believe in gods or even a God. What is rumoured about either the singular or the plural does not attract me. The afterlife sounds very boring and this life I find boring enough. If there is a heaven I pray to it to save me from eternal boredom but as there is scant risk of an afterlife I doubt I have to worry.