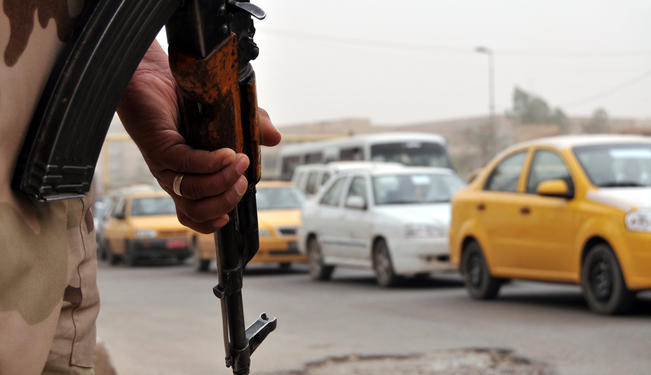 Blaming foreign influences and a lack of introspection has dogged Iraq’s history for far too long.

Any window of opportunity that may exist for the Iraqi military to execute a full assault on the city of Fallujah appears to be closing.

The US Congress has a grip – albeit a flimsy one – on the sale of dozens of Apache helicopters to Iraq, on the grounds that they might be used to take down political opponents rather than wrest control from al-Qaeda in Iraq. However, that has not stopped the US from supporting Iraq by stepping up its deliveries of missiles and surveillance drones in recent weeks.

Once again, fear has been growing that Iraq is set for "another civil war" after over two years since the US troop withdrawal, with death tolls usurping context and rational discussion.

Iraq’s prime minister, Nouri al-Maliki, has been keen to play down fears that the country is on the verge of another wave of violence. "The important thing is not to attack the city and kill innocent people because of those criminals," Maliki told Reuters in reference to Fallujah. Much can be said about any political leader in the world who can order a wave of bombs over one of his own cities – and doing so during an election year.

Cynicism aside, the prematurely depicted battleground of Fallujah presents an interesting arena for assessing Iraq’s fragile civil society, the responsibilities of its elected officials, and the role of foreign influences, including terrorism.

Since 2006, and perhaps unbeknownst to the Iraqi media, Maliki has been able to frame the political debate surrounding Iraq’s security and democracy to his own needs. This is because even those who openly oppose Maliki are merely playing up to his belief that there are people in the country who are against him and thus against Iraq’s progress.

With every wave of attack that Maliki unleashes against a political opponent, Iraqis are reminded that there are outside influences trying to stop the country from becoming a prosperous and progressive democratic state. Like Saddam Hussein had done so during the UN sanctions period, placing the blame on foreign intervention makes it easier for Maliki to retain control in an otherwise ineffective and incapable government. In return, Maliki is accused of marginalizing Sunnis and at risk of stirring up a civil war.

Extreme violence is not new in Iraq (remember the Iraq-Iran War, the Gulf War, and Hussein’s dictatorship) and the recent increases, while remarkably large, cannot be solely attributed to a perceived lack of security. In fact, Iraq's increased security of roughly 50 civilians to every army personnel made it one of the most heavily policed states per capita in 2013. Unsurprisingly, this did not prevent Iraq from having its deadliest year for five years, which in May to July 2013 averaged 230 deaths per week.

The biggest danger to Iraq is not Iran, Saudi Arabia, or even the newly rebranded al-Qaeda  – the Islamic State of Iraq and al-Sham (ISIS). Instead, it is the severe lack of introspection, which is a hallmark of any decent and non-violent democracy.

The act of terrorism — or rather planting bombs, kidnapping, torturing, and murdering for the cause of mass physical and psychological damage to society — is a business in Iraq. Businesses such as these are parasitic, thriving in countries where the economy does not allow everyone to participate – Iraq is such a country. Kidnapping a neighbor and bargaining with his family for a ransom can be far more rewarding, financially-speaking, than having no work at all.

However, terrorism is not only about the money or career progression. There are devotees who do it for the love of the values their cause represents. For some, waving the banner of al-Qaeda is a way to unite in defiance of the Iraqi government and in support of the marginalized Sunni minority. There are others who believe that an extremist Islamist state would serve the people better than a modern liberal democracy.

Maliki and his administration, on the other hand, are doing little to demonstrate that a liberal democracy is the more sensible way to move forward. The violence he has used to further his cause is only backed up by a frighteningly contradictory constitution, which further allows any terror cell to claim a similar level of legitimacy in its own violent actions.

In December 2011, Maliki accused his vice president, Tariq al-Hashimi, of terrorism after three men claimed on Iraqi television that they had carried out bombings and assassinations on his behalf. It was later revealed that those men had been tortured before "confessing," yet what they revealed was never independently confirmed. US officials were even aware that there had been a previous attempt by Maliki’s security forces to coerce confessions that would implicate Hashimi in terrorist activities.

Iraq’s problems are too quickly filed under sectarianism or undue foreign influence. However, there are four key points, which have yet to be explored deeply in the wider media or among the country’s abundance of political commentators.

First and foremost, Iraq is not a democracy. That is, at least not in the same vain as the likes of Britain, Norway, and Japan. Iraq’s democracy is riddled with loopholes and gaping failures that allow the electorate’s rights and choices to be undermined, fuelling the fires of the newly politically mobilized population.

Additionally, there is a severe lack of will to protect journalists and create a credible media, with one newspaper funding itself by blackmailing the people it writes about and little to no retribution against those who wield weapons in newsrooms after reading a story they did not like.

However, Iraqis themselves had a large role to play in making this poorly informed interpretation of democracy a reality. In Iraq’s political system, the prime minister can bypass senior security ministers and parliamentary oversight while controlling Iraq’s armed forces. Such a democracy in which an individual can personalize the control of the country verges on authoritarianism. It is not a situation that could have been solely orchestrated by al-Qaeda or by the interference of Iran.

Furthermore, it is the politically and socially constructed, rather than inherent, differences between Sunnis and Shi'as that provided cause for religious groups to unite into their tribal-like communities in order to barter for better rights. Without doing so, they risked being further marginalized under the government’s personalized control of the country.

As a result, Iraq has a democracy that does not serve the people, but rather those who can form a powerful political grouping which is strong enough to alter the country to match their own desires.