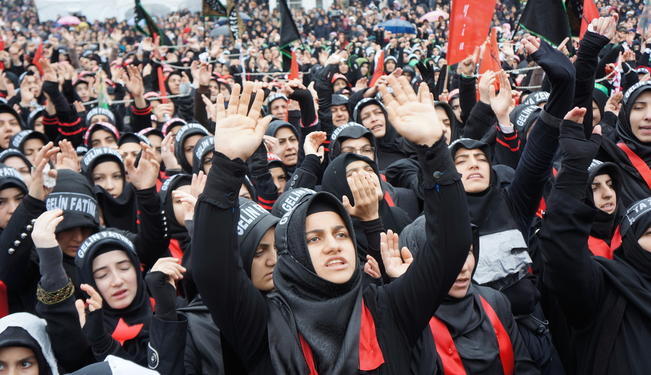 Hostility between Sunnis and Shi’as has taken on an increasingly political core. This is the first of a two part series.

The Iranian Revolution in 1979, led by Ayatollah Khomeini, was a turning point in modern Sunni-Shi’a relations in the region. Many Sunni Muslims actually supported and came out on the streets in favor of what was taking place in Tehran at first, but over the years this has gradually turned into apathy and to its current state of resentment. Arab media led by the likes of Al Jazeera, rightly or wrongly, drilled it into the minds of the Arab masses that there was a "Shi’a" Safavid regime intent upon taking over the Arab lands. The only staunchly "Sunni" country opposed to Iran was Saudi Arabia, and thus, the two kings of the modern battle rose to their thrones.

The Origins of the Sunni-Shi’a Divide

For years, we have been fed the same narrative that at the heart of the battle for the Middle East are two warring camps, hell bent on winning this game of chess that began over 1,400 years ago in the Arabian Peninsula after the demise of Prophet Mohammed. Although this is not completely wrong, it is most certainly a simplified and extremely selective analysis of history.

The succession to Mohammed pitted the Shi’as on one side, who wanted his cousin and son in law, Ali bin Abi Talib, to take over against the Sunnis who, on the other side, wanted his companion, Abu Bakr, to rule.

This battle has transcended time and manifests itself today, most notably in the battles for Iraq, Syria and Lebanon. What do these Middle Eastern countries have in common?

A sizable, yet not overwhelming number of inhabitants hailing from both sides of the board. But is it really as simple as that, or are we being naive to think that simply having both Shi’a and Sunni in close proximity will inevitably result in a showdown?

For many years, the hostility between Shi’as and Sunnis has taken on an increasingly political core; although it inevitably gets cloaked in a guise of being about religious differences. This, of course, is advantageous to political elites on both sides, who would otherwise struggle to mobilize the masses had they tried to sell the battle based purely on the economic gain and longevity of the upper echelons of society.

This was very evident in the tiny gulf island of Bahrain, which saw mass protests flare up in 2011. The events there were an entirely peaceful wave of protests and civil disobedience against the Sunni monarchy of King Hamed Al-Khalifa. Protestors demanded equal representation, and human rights and political freedom for the country as a whole and, in particular, for the majority Shi’a population. It is imperative to note that while most protestors came from a largely Shi’a background, countless Sunnis who acknowledged the continuous tyranny bestowed upon their own country also came out in unison to call for an end to the suppression.

Over time, the Bahraini police force, largely made up of men imported from the Indian sub-continent, were summoned to brutally crack down on demonstrations that began to threaten the very survival of the monarchy. At one point, Al-Jazeera reported that more than 100,000 protestors had amassed around the Pearl Roundabout monument in Manama, calling for an end to the rule of the Al-Khalifa monarchy — in fact, by now they were calling for the king’s head.

It is at this point that the sectarian propaganda power play really came to the fore. Bahraini media began its blatant attempts to discredit the protestors as Iranian lackeys — a common pattern by Arab regimes since its inception by Saddam Hussein during the 1991 uprisings in Iraq — and even began accusing Shi’a Muslim hospital staff of selectively treating the wounded based on sect. This has since been completely refuted by numerous sources, including Sunni Muslims at hospitals who worked tirelessly alongside their Sh’ia Muslim compatriots. Nevertheless, the Al-Khalifa regime had played their sectarian trump card, but with debatable success.

All this while the supposed bastions of democracy in the West were doing little, if anything at all, to champion the democratic goals and aspirations of the Bahraini people. One certainly has to consider the important trade and military ties, such as the stationing of the US Navy’s 5th fleet on Bahrain's shores.

Syria is yet another case in point. The Syrian Army, whilst dominated by members of Bashar Al-Assad's Alawite sect in and amongst the top ranks, is actually compromised of a Sunni majority in the rank and file with estimates of around 60%. Thus, in the Syrian armed conflict, we either have a people who do not actually realize that they are Sunni Muslim and going out to fight other Sunni Muslims, or this could be explained more reasonably as a political battle and, perhaps increasingly in Syria’s case, one between secular and religious fundamentalist ideologies.

If the sectarian narrative was correct, then half of the Syrian army would have at least defected by now and the regime would not last a week under such circumstances. This did not happen. Another factor with regards to the battle currently taking place in Syria is that the majority of the religiously driven rebels, such as many members of Jabhat Al-Nusra, are not actually Syrian. They originate from countries afar as Chechnya and Afghanistan and have come to Syria to fight what they see as the heretical Alawite regime. Thus, if we were to take the foreign imports out of the equation, including the Shi’a militias such as Hezbollah flooding into Syria from Iraq and Lebanon to support the secular Assad regime and protect the various religious Shi’a shrines, then the battle would take a far less sectarian appearance.

One can use the modern Iraqi state as another example of why the Sunni vs Shi’a narrative does not necessarily hold true. Sunnis and Shi’as have historically — and even to this day, although to a lesser extent — lived side by side, intermarried, formed businesses together and generally led a unified existence. It was normal that Sunnis and Christians, for that matter, would partake in Shi’a Muslim rituals of mourning during the Islamic month of Muharram. In fact, if you were to ask many Baghdad residents of a bygone era, they would tell you that they honestly did not know what sect their immediate neighbors adhered to, and neither did they care for that matter. To this day, Iraqis consider inquiring or asking questions to this regard as aeib (rude). It simply did not matter, and why would it?

Tales of a time where you could enjoy the famed Iraqi Mazgoof style fish on the famous Abu Nuwas street with a Sunni, Shi’a or Christian friend and still be none the wiser, still evokes a sense of pride amongst Iraqis. There is a popular saying that Iraq has only seen two just rulers in its history: Imam Ali bin Abi Talib and Abd Al-Karim Qassim. The former was introduced above and the latter was a Sunni Muslim by definition, yet raised by a Shi’a Muslim mother from a Feyli Kurdish background. Both were widely seen to have worked solely for the people with little or no interest in any self-benefit.

Compare that to the Iraqis’ views of their government today: stories of immorality and corruption that would make even the devil wince and the dots begin to add up. Many Sunni Muslims accuse Iraq’s government of being a totally sectarian regime with only Shi’a interests at heart. Now, anyone with any idea of the make-up of the Iraqi government or political system would know this to be a half truth at best, for many positions are occupied by Sunni ministers.

This fact in connection with certain developments in the recent protests in the Sunni Anbar province against perceived persecution, shows another flaw in the simplistic Sunni vs Shi’a narration. For one, there were many Shi’a Muslim tribes showing solidarity. Although sections of the protestors did not greet them with a warm embrace, many did. Secondly, whilst there were documented cases of sectarian chanting and public speaking at the protests, as well as on some of the countless satellite channels now swamping Iraq, there was largely an attempt by the organizers to portray an inclusive heart at the core of the protests.

Finally, when Sunni Muslim government officials, such as Deputy Prime Minister Saleh al-Mutlaq, tried to attend and take part in the protests (ironically aimed at the very government he is part of), the protestors gave him the now legendary Iraqi shoe and slipper treatment and chased him out. The fact that in the middle of the now supposedly sectarianized Iraqi society we had Sunni protestors physically attacking a Sunni government official, once again shows the flaws of the accepted Sunni vs Shi’a narrative.

Many are quick to point out that during Saddam Hussein’s rule, there was seldom any intra-Islamic or religious friction in Iraq. In reality, this is just an illusion at best. While Saddam did clamp down on any fighting between the many religious sects and factions that make up Iraqi society, he engaged in it himself and only managed to keep a lid on the pressure cooker of tensions and animosity that he created — until it exploded and wreaked its havoc across Mesopotamia following the American-led invasion in 2003.