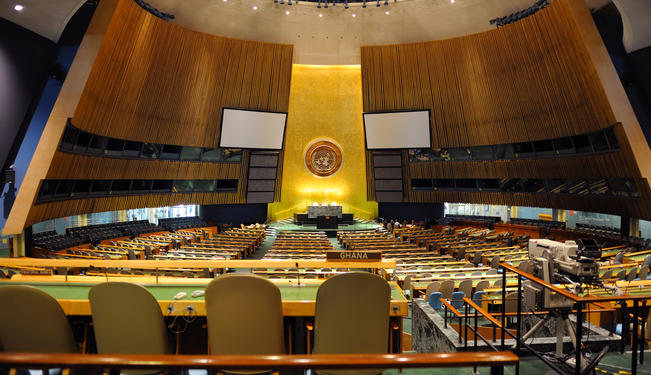 Despite recent tensions, Saudi Arabia will not alter its diplomatic ties with the US.

The United States and Saudi Arabia have a long-standing alliance, sealed in oil since the 1930s. Even though this relationship has experienced ups and downs – due to the oil embargo in 1973 and 9/11 – Saudi Arabia is still the cornerstone of Washington's strategy in the Middle-East.

Recently, however — especially under the Obama administration — there has been a feeling in Saudi Arabia about a widening gap between the two countries when it comes to foreign policy. Despite his renowned 2009 speech in Cairo, Barack Obama has failed to make his mark in the Middle East, and has been at a deadlock on several issues: Palestinian statehood; the 2014 Afghanistan withdrawal; the Iraq War; and now the Syrian crisis.

In 2011, Saudi Arabia was disgruntled by Washington's unwillingness to back a crackdown on Bahrain's Shiite rebellion — the latter is ruled by a Sunni monarchy and is an ally of the kingdom. In another development, the US recently suspended part of its financial assistance to Egypt, while Saudi-Arabia and other Gulf states such as the United Arab Emirates and Kuwait have pledged to counterbalance the sanction with roughly $12 billion in financial aid.

The major disagreement, however, revolves around two countries: Syria and Iran. Linked with the Sunni-Shiite conflict, the Saudis are wary of diplomatic developments between the US and Shiite-majority countries – first and foremost Iran – which could put into question the regional balance of power. While all elements indicated a likely attack on Syria after the use of chemical weapons in August 2013, Obama decided not to intervene, to the great displeasure of the Riyadh.

Furthermore, the Saudis are worried about the current negotiations between Iran and the US over Tehran's nuclear program, which may end Iran’s isolation in the international arena. In fact, Saudi Arabia is perceived as the main US proxy in the region whereas Iran has chosen – and in part was forced to choose – a more independent foreign policy path since the 1979 Revolution.

Iran also has a rooted military culture, reinforced by a nuclear program, whereas the Saudis usually rely on external assistance. Saudi military weakness was made evident by the recent difficulties the kingdom encountered in putting down the Houthi rebellion in Yemen. The kingdom’s rulers do not want a return to the Shah's era, when Iran was the main ally of the “twin pillar” strategy of the US in the Middle East throughout the 1970s.

A Symbolic Decision or a Real Foreign Policy Shift?

Saudi Arabia's unprecedented announcement on October 18, 2013, to decline their non-permanent seat at the United Nations Security Council (UNSC) came as a big surprise to many. Indeed, over the last two years, Saudi Arabia had been ardently lobbying to obtain this seat as a non-permanent member.

In a statement, the foreign ministry explained that Saudi Arabia had no other option but to turn down Security Council membership “until the body is reformed and enabled, effectively and practically, to carry out its duties and responsibilities in maintaining international peace and security.”

Beyond the initial surprise, Riyadh's decision was applauded in several places. The UNSC’s perceived incapability on reaching a consensus over the Syrian war has been criticized by many countries. Turkey, Pakistan and France claimed to understand the Saudi standpoint. Many Arab countries and the Arab League have saluted the decision.

However, beyond the symbolism of the act, is there a real possibility for a different Saudi foreign policy, marked by less reliance on the Americans? As explained by Frederic Wehrey: “My sense is that they are still committed to US security assistance. What are their other options?”

With regards to Syria, Saudi Prince Bandar bin Sultan, director general of the Saudi Intelligence Agency, has been lobbying the Russians for months to let go of Bashar al-Assad. First, he offered $15 billion in weapon contracts. Then, he proposed a great deal between Russia and the OPEC countries. But Russian President Vladimir Putin did not want to interrupt his support for Assad.

Seeing that his endeavors have failed, according to media reports, Bandar had the audacity to threaten Putin with regards to the security of Russia's 2014 Sochi Olympics, implying that Chechen groups acted more or less under Saudi guidance. However, that was a dramatically exaggerated claim, and former KGB spymaster Putin did not fall for it. Consequently, Saudi-Russian discussions have reached a stalemate.

The hypothesis of obtaining support from several European countries on Syria through military intervention is thus more likely, as France openly supported military action after the recent chemical weapons attack. The controversial NSA spying allegations prompted tensions between the United States and EU countries, particularly with France and Germany.

However, it is doubtful that European countries would intervene in Syria without American and Russian approval. The 1956 Suez War humiliation – when the US and the Soviet Union pressured France and the UK to withdraw their forces – is still present in the minds of European politicians. Even if French President Francois Hollande favors a military operation, he is more a Mollet than a de Gaulle, known for his strong and independent foreign policy and “politique de grandeur.”

Thus, the Saudis can probably count on official support from different European countries in the realm of public discourse, but not for a military intervention in Syria. In practice, Saudi Arabia would be more likely to obtain endorsement from EU countries, for example, regarding a reform of the UNSC than explicit support with regards to the Syrian crisis.

Can Saudi Arabia Demarcate Itself From America’s Stand?

Most US analysts are skeptical about the depth of the current tensions. Saudi Arabia needs American military support as there is little chance of finding an alternative ally in the region which is as strong and reliable as the US has been. Some analysts argue that Saudi Arabia could cause trouble to the US in the Middle East through a number of ways: by applying pressure on the oil market, encouraging Bahrain to shut US bases in Manama, and voicing support for popular unrest in Palestinian territories. Currently, Saudis are raising fears of a nuclear deal with Pakistan to put pressure on the White House — if Iran does not put an end to its nuclear program.

Americans know they have to reassure the Saudis about Iran and Syria. US Secretary of State John Kerry reaffirmed the US' inflexibility about Iran’s nuclear program, considered as a key concern to Riyadh. In his most recent visit to the country on November 4, Kery described Saudi Arabia as being: “…very, very important to all of us. The Saudis are really the senior player in the Arab world together with Egypt.”

Moreover, both countries have strong economic links which are difficult to break. The US is Saudi Arabia’s largest trading partner and Saudi represents a key US export market in the Middle East. In mid-October, the US Defense Department announced that it was planning to sell weaponry worth $10.8 billion to Saudi Arabia and United Arab Emirates. A Gulf economist argued in this context: “Saudi State entities and large companies prefer to deal with firms they know. It is not easy to suddenly change… in response to short-term political considerations.”

The strong business links extend to many areas, including nuclear energy. A Saudi official commented: “This is just a political rift and doesn't mean that it will affect the private or public business.” Most of the rulers have been educated in the United States, which further strengthens ties between businessmen and statesmen from both countries.

It could be a dangerous game for Saudi Arabia to distance itself from the US. They are a strong ally in protecting the kingdom from intrusion in its internal affairs. If the United States decides to criticize Saudi Arabia more firmly on its human rights record, as several countries did at the UN Human Rights Council, the stability of the Gulf monarchies could be seriously undermined.

In his most recent book, After the Sheikhs: The Coming Collapse of Gulf Monarchies, Christopher M. Davidson offers an insight into the predicaments that Gulf states will have to face in the foreseeable future. He argues these countries have solely bought time with petrodollars and prominent investments in welfare and the public sector, but that this is not sustainable. The repressive response to social protest cannot be indefinitely covered up, especially since the Arab Uprisings.

It is better for Saudi Arabia to maintain good relations with the US which does not challenge the kingdom on its repressive state policies and human rights abuses. This is realpolitik: It is not easy to replace a long-term ally like the United States.