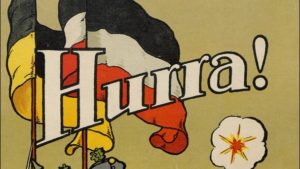 Hurray! A war picture book (1915). Children, as well as adults, were expected to support the war and contribute also through fund raising and making supplies such as clothing and sand bags. The interpretation of the war was also seen as vital in children’s education. In many countries, the war became the dominating or only subject in schools. This book describes a dream by the German boy Willi. With his Austrian friend Franzl, they set off on an adventure, to kill French, English, Russian and Serbian soldiers. The depiction of children in uniform – boys as armed forces, girls as nurses – was common throughout Europe during the war.