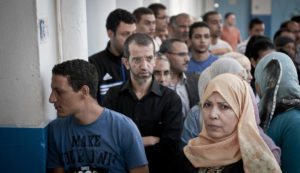 Tunis, Tunisia 16 October 2011
Tunisians wait to vote in a polling station of Tunis, during a simulation of vote.
This simulation of vote was held in a school of Tunis with the aim of monitoring and verifying the mechanism of vote that will take place on October 23rd 2011.
It was organised by the ISIE (Instance Superieure Independante pour les Elections). The ISIE is an independent public institution with financial and administrative autonomy, and whose primary mission is to oversee the elections of the Constituent Assembly and to ensure democratic, pluralistic, fair and transparent elections.
Photo: Ezequiel Scagnetti