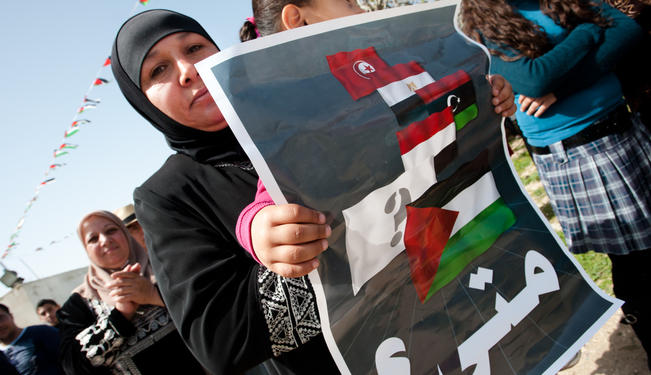 Women’s movements in Morocco and Tunisia are at a crossroads. This is the first of a two part series.

“This is a critical time. There are two steps in a revolution: You break it and then you build something new. That’s the hardest.”

Moroccan and Tunisian women’s movements have reached a crossroads following the recent uprisings in the Middle East and North Africa. In this historical moment, the slightest spark could initiate substantial change. There has never been a better time for women to take advantage of the current political climate of revolutionary change in the Arab world than at this very moment.

The past two years have shown a long-dormant side of Middle Eastern and North African civil society. Various marginalized civil society groups took the stage and initiated a veritable sandstorm of sociopolitical transformation across the region. Not to be viewed as a single movement, each case was different and complex, implicated different people, and showed no common patterns across cases.

The uprisings that brought down the leadership in Tunisia, Libya, and Egypt, and instigated landmark structural change in Morocco, demonstrated the capabilities of social movements to take on political clout. However, they also left a lingering tension foreshadowing that there might be more to come.

The uprisings were not about “how the globalization of the norms of civic engagement shaped the protesters’ aspirations. Nor [were they] about how activists used technology to share ideas and tactics. Instead, the critical issue is how and why these ambitions and techniques resonated in their various local contexts.”

In this two part series, I will examine the Tunisian and Moroccan women’s movement’s potential for future activism post-Arab Spring.

Women’s Status at the Crux of the Arab Spring

Prior to the monumental displays of civil resistance in early 2011, regimes and political systems in the Arab world were notably constructed around the personalities of individual leaders. This led to the exclusion of nearly all other political actors due to the concentration of state power and the institutionalization of personal power. Authoritarian regimes in Morocco and Tunisia used political parties and state institutions, respectively, as mobilization tools and monitoring mechanisms of the population.

In particular, women’s interest groups in Morocco and Tunisia continued to exist despite increasing marginality because they provided a number of functions for the regimes. Most importantly, they supplied the regimes with a greater degree of perceived legitimacy, and created more avenues of contact between power holders and the ordinary population — which allowed the regime to monitor the views and reactions of the population, and either respond to threats or adapt policy to placate the masses.

In Morocco, transitioning monarchies provided for a more open discourse on political life, despite slow-moving change concerning women’s position in sociopolitical culture. Tunisia, on the other hand, boasted progressive civil liberties from the time of independence, and is now at a crucial moment with rapidly changing politics that may have negative effects on the future of women’s rights.

Morocco’s transition from authoritarian monarch to the "progressive" king in the early 2000s brought with it the emergence of political dynamism, including the introduction of women’s rights into the national discourse by marginalized women’s activists. Women’s groups in Morocco were perpetually present in the backstage of society, occupying the fringes of the government discourse on citizen rights.

The women’s movement in Morocco thus manifested as a non-state directed initiative, to initiate a revision of the constitution to include universal civil liberties and improve women’s status in the public sphere. In order to keep women’s activism at bay and to gain marginal support from the movement, the Moroccan government handed over strategic concessions to the women’s movement. At the same time, they placed social and legal barriers impeding the full-integration of women in the public sphere, which perpetuated the de-politicization of the women’s movement.

King Mohammed VI’s early constitutional reforms were merely skirting around the primary agenda of the women’s movement: universality, gender equality, full legal rights, and socioeconomic equity. However, with the new generation of leadership, a new generation of women emerged not simply looking for more rights, but rather for all rights.

The success of mass demonstrations in Morocco proved different from previous popular uprisings, because the February 20 Movement featured members of political parties and organizations on the fringes or formally outside the official political processes.

Therefore, the Arab Spring was a prime opportunity for Moroccan women to assert themselves into the new national discourse. As marginalized groups not financially, politically, or socially supported by the government, women’s activists in Morocco were able to find a place in the wave of mass demonstrations as members of the marginalized political community.

The goal of the February 20 Movement was to bring the monarch under harsh light for his absolute authority and lack of delegation of power, and to promote democratic ideals in the Moroccan political sphere. More importantly, from a micro-institutional perspective, women were not included in the national discourse until this moment — giving women’s groups more initiative to launch a "rogue" or non-state directed initiative in the hopes of gaining momentum from the movement.

For decades, Morocco's women’s movement made gradual progress towards attaining equal rights in Moroccan state and society; although it often accepted government concessions, failed to "push the envelope" on advocating for change, and "sooner or later, this battle will come to a close. Morocco’s authoritarian system will irrevocably change, for that is the direction of history.” Therefore, women in Morocco have the opportunity to initiate major changes in the current political atmosphere and continue the momentum of the Arab Spring.

On paper, women gained nearly equal status within the Moroccan family structure (concerning divorce, adoption, nationality, and inheritance, among other topics of contention) as well as legally gained equal economic, social, cultural, and environmental rights in the new constitution of 2011. However, Moroccan women still face social and political resistance in their integration as full citizens into the public sphere.

Having gained legal rights on nearly equal standing with Moroccan men, women are now faced with the task of seamlessly gliding into the public sphere; thus running for political office with men as their equal competitors and navigating the public/social sphere with no resistance or backlash.

In this case, Moroccan women stand in the center of two sides of resistance: reluctance from the top to acknowledge and integrate women into politics as equal competitors to men, and adversity from the bottom to allow women to enter the public sphere as men do.

Where it All Started: Tunisia

Neither the Moroccan February 20 Movement, nor any of the large-scale civil resistance movements across the Arab world would have happened if not for their catalyst: the Tunisian Revolution. Prior to toppling the now-former president, Tunisia was looked upon as the image of modernization in the Arab world. Former President Zine el-Abidine Ben Ali, though quietly corrupt, promoted women’s rights, created the Arab world’s largest middle class, and allowed an impressively organized labor movement.

Despite these virtues, Ben Ali’s government “tightly restricted free expression and political parties… [and] cultivated and manipulated the country’s international image as a modern, technocratic regime.” The autocratic regime’s large elite network consisted primarily of Ben Ali kin, also known as “The Family,” and was widely criticized for its corruption and for “prostituting the country for foreign exchange.”

The protests that eventually led to the Tunisian revolution were an intensive campaign of civil resistance, beginning with street demonstrations in December 2010 and culminating in the collapse of the authoritarian regime in January 2011.

Ben Ali realized the scope of popular support that women provided for the state, and thus used their status as autonomous political actors as a strategic political tool to maintain support from the female population. Until 2011, women in Tunisia were sure of their place in Tunisian sociopolitical culture. However, with change came uncertainty.

With the new government led by the moderate Islamist Ennahda party that was freely elected into power, the formal political arena opened up to a plethora of new political parties and, as a result, the women’s movement in Tunisia was no longer a cohesive unit with the state sponsorship as a common thread. As a multitude of political parties and interest groups were brought into the political area, the women’s movement was divided — primarily between those holding Islamist views and those holding secular ones.

Whereas nationalism was used in the previous authoritarian regime as a mechanism to interact with civil society and was widely inclusive in order to leave no room for opposition to form, the new government is operating in an open playing field and is left to contend with the vast array of opposition groups that have emerged since the revolution.

The primary issue women’s groups now face in Tunisia is the sharp generational, cultural, and ideological divide among opposition groups that are pitting women against one another. On the one hand, women are being influenced by a conservative Islamist movement that is pressuring the government to implement policy in line with Islamic political ideology.

On the other hand, there is a significant faction of secular women who want to see Tunisian legislation completely separated from religious influence. The moderate Islamist government is trying to juggle fulfilling the religious agenda of its supporters with maintaining the support of the masses, who include a significant portion of non-religious advocates.

Women’s status in Tunisia is in the center of a highly contentious debate that spans politics, culture, and ideology — leaving the future of the women’s movement in a very uncertain state.