Mauritania is rarely in the news. A member of the Arab League, it shares with its southern neighbor Senegal a large offshore gas field that promises to bring a potentially huge windfall to the impoverished northwest African nation. The Greater Tortue Ahmeyim field sits in the Atlantic Ocean off the coast of the two countries at a depth of 2,850 meters. According to BP, which is invested heavily in the field, it has an estimated 15 trillion cubic feet of gas and a 30-year life span.

BP says it is committed to sustainable development and promised a variety of programs to train Mauritanians, create jobs, contract local companies and build third-party spending with those companies. It has made further commitments to health and education projects, social development, capability building and livelihood and economic development.

But with the gas market depressed by a combination of COVID-19 and unusually warm winters in Europe, the bright hopes for Tortue Ahmeyim are already starting to fade. The initial goal of a staggered launch in three phases in 2020 to bring the field to full capacity by 2025 has been shelved. Phase one is now pushed back to the first half of 2023, with the Middle East Economic Survey (MEES) quoting Kosmos CEO Andy Inglis in May as saying that a final investment decision on phases two and three will not now be considered “until post-2023 when we’ve got Phase 1 onstream.” The goal of reaching full capacity is pushed back toward the end of the decade.

What may be more unsettling for the government of President Mohamed Ould Ghazouani was BP’s announcement in the summer that it will slash oil and gas output by 40% over the next decade. That was followed by the 14 September release of the company’s Energy Outlook 2020 that presented scenarios where peak oil demand had already passed or would pass by the middle of the decade. It is important to note that, presenting the Outlook, BP’s chief economist, Spencer Dale, underlined that “The role of the Energy Outlook is not to predict or forecast how the ‎energy system is likely to change over time. We can’t predict the future; all the scenarios ‎discussed in this year’s Outlook will be wrong.” That may be cold comfort to President Ould Ghazouani.

The hard fact is that early ebullience about the potential of the Tortue Ahmeyim project by its consortium backers has now been replaced with an abundance of caution and with brakes strongly applied. So much so that James Cockayne, of MEES, opined: “The likelihood of these developments ever seeing the light of day, at least under BP’s stewardship, needs to be considered anew in the light of the latest far-reaching strategy shift from the UK major.” His gloomy conclusion was that “Mauritania’s hopes of gas riches appear to be hanging by a thread.”

The president has another issue weighing heavy in his basket of worries, and that is the question of normalization with Israel. Commentators have anticipated that Mauritania would join the UAE and Bahrain in recognizing Israel, especially as Tel Aviv and Nouakchott had diplomatic relations from 1999 to 2009. In 2009, Mauritania froze relations in protest at Israeli attacks on Gaza.

The UAE’s Mohammed bin Zayed, the Abu Dhabi crown prince and de facto ruler, has been the driving force in Arab normalization with Israel. With Ould Ghazouani in attendance in Abu Dhabi, in February bin Zayed announced $2 billion in aid. For a country with a GDP that the World Bank estimated in 2018 stood at just over $5 billion, that sort of largesse buys a lot of influence.

But the president is well aware of the strong sentiment within the country for the Palestinian cause. Tewassoul, the opposition Islamist party, was instrumental in 2009 in bringing protesters onto the streets of the capital demanding an end to diplomatic links with the Israelis. The party also backed the candidacy of Sidi Mohamed Ould Boubacar in last year’s presidential election. Ould Boubacar took 18 % of the vote, while another candidate and leader of the anti-slavery movement, Biran Dah Abeid, scored a similar percentage. Ould Ghazouani won with 52%, with the opposition denouncing the election as rigged.

Although Mauritania officially outlawed slavery in 1981, the practice continues, with approximately 90,000 out of a population of 4.6 million enslaved. That situation caused US President Donald Trump’s administration to revoke Mauritania’s preferred trade status under the African Growth and Opportunity Act. Justifying his decision, Trump cited the fact that “Mauritania has made insufficient progress toward combating forced labor, specifically, the scourge of hereditary slavery.”

It may be that if he wins reelection, Trump will revisit that decision and offer to drop the revocation as a carrot to bring Mauritania onto the normalization bandwagon. That would, of course, do nothing to hasten the end of slavery. As Human Rights Watch (HRW) notes in its World Report 2020, the Mauritanian government is doing precious little itself: “According to the 2019 US State Department Trafficking in Persons Report, Mauritania investigated four cases, prosecuted one alleged trafficker, but did not convict any.” HRW also detailed numerous human rights abuses, the stifling of free speech and the harassment and arrest of opposition politicians and activists, including the anti-slavery movement leader and presidential candidate Biran Dah Abeid.

There is no doubt that the promise of economic gain that Tortue Ahmeyim represents could go some way toward steering Mauritania onto a modernizing path. Though the 2019 presidential election was challenged by the opposition, it did represent the first peaceful transition in the country’s long history of military coups after gaining independence from France in 1960. That, coupled with the windfall the gas field could bring, is a step in the right direction. But if the Tortue Ahmeyim project falters, so too will Mauritania’s chances for a better future. 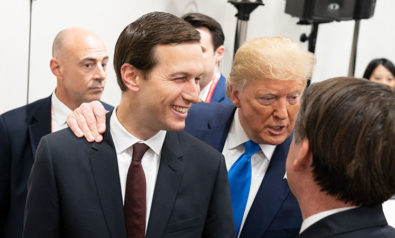 The UAE and Israel: Not So Big a Deal