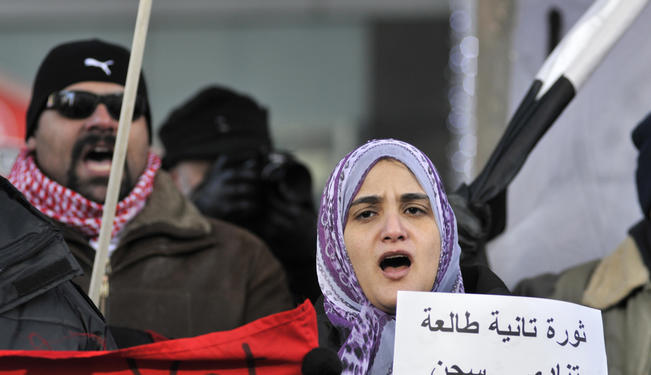 Following the Arab Uprisings, the Middle East continues to suffer from a lack of media freedom. This is last of a two part series. Read part one here.

Another factor limiting the Arab media are vague laws about protecting the “public order.” In perhaps the most egregious use of such a law, a Saudi journalist was convicted and sentenced to 50 lashings for reporting on electricity outages in 2010. His reporting — in which he noted people were upset about the electricity failure and were considering taking collective action — was accused of stirring up protests and violating public order.

Many other Arab countries cite maintaining “public order” as a justification for arresting journalists. International jurisdictions tend to create specific, narrow rules for arresting anyone on the grounds of disrupting public order. For instance, in the United States, a speaker must be advocating “imminent lawless action” before an arrest can be made. Such an approach creates a wide boundary to allow journalists to practice their profession and citizens to criticize their government without worry of arrest and harassment.

In May 2013, the UAE government charged an online activist with violating the public order provision of the recently updated cybercrime law. The activist was charged with violating Article 28, which makes it a crime to use digital technology “with the intent of inciting to actions, or publishing or disseminating any information, news, caricatures, or other images liable to endanger security and its higher interests or infringe on the public order.” Such a broad directive makes any report a danger to public safety, leaving little room for good journalism or free expression.

In 2012, a Kuwaiti court shut down the largely Shiite newspaper Al-Dar for six months, “prompted by two articles that were accused of inciting violations of public order and expressing hate toward certain religious and social groups.” The articles in question had described the movement of Saudi troops into the Shiite-majority kingdom Bahrain during unrest in that country. Such reporting does not appear rooted in a desire to upset public order or create religious strife.

In late 2012, the government of Jordan approved new regulations that forced online news sites to register with the government. Many groups spoke out against the move as a means to dampen the independence of websites and make them more in line with the timid newspaper press in Jordan. In early June 2013, the government ordered the blocking of 200 news websites that had refused to comply with the registration scheme.

In May 2013, Iraq revoked the licenses of nine satellite news channels. While they could still broadcast inside the country, the news outlets no longer had the right to gather and report the news in Iraq. The revocations came from Iraq’s media commission, a government body with wide authority to regulate who can practice journalism and what information can be reported. Many of the stations had aggressively covered the Sunni protest movement in Iraq.

But perhaps the biggest limitation to Arab journalism (and, again, forgive me for speaking in generalities) is the effect of years of repression on the profession. Many journalists simply accept that they cannot do their jobs properly and have acquiesced to the situation. Others, who have been elevated to positions of authority in Arab newsrooms, have become adept at censoring the journalists under them. In countless discussions with journalists in the Arab world, I have heard that editors often do the jobs of government officials by killing the stories they sense may cause trouble.

In his book, The New Arab Journalist, Lawrence Pintak reveals many examples of self-censorship in the Arab world. An editor for a Saudi paper says: “We know our limits and in a way practice self-censorship. There have been troubles when red lines have been crossed.” And an Egyptian reporter working for an Emirates newspaper said he had asked himself “two or three times what will be the reaction” before publishing an article. Another Gulf editor said it plainly: “Our press is infected with the self-censorship virus.”

The effect of this self-censorship is depressing. Perhaps some of the troubles of the Arab Spring — unemployment, government corruption, and stagnant economic growth — could have been addressed if the news media weren’t beaten down by government harassment. But these issues were ignored by a timid Arab press and allowed to fester. Despite the proliferation of media outlets in some of these countries, the overwhelming stance is for the media to continue to tow the government line. One newspaper that challenged the status quo in Egypt, the Egypt Independent, sadly shut down earlier this year because it couldn’t stay afloat financially.

These broad criticisms refer to the local press in each country and how they cover their own government and business interests. Many press outlets provide laudable coverage of situations in neighboring countries. For example, the National in the United Arab Emirates closely covers arrests in Kuwait, Oman, and other Arab countries over freedom of speech issues. However, when reporting on arrests in its own country, the paper defers to government statements or muted trial coverage.

Fed up with the old media outlets that self-censor at home, many residents have turned to Twitter, Facebook, and YouTube to give and receive impartial and unfiltered information. The result was an explosion throughout much of the Arab world. Libya, Egypt, Tunisia, and Yemen have all seen their long-time autocratic rulers depart. The state-aligned local media could not protect them. And those countries that haven’t yet seen a change in leadership are worried about their future and keen to stop social media from evolving into a space for free expression. All of the Arab sheikhdoms have made arrests for speech on Twitter — sending an important signal the people that they expect boundaries to be respected. Kuwait has arrested dozens of people on “insulting the emir” charges, while the UAE has arrested scores of residents (mostly over what they said on social media platforms) and ultimately charged them with sedition. Even in Qatar — which hosts the Al Jazeera and the Doha Centre for Media Freedom — convicted a poet and sentenced him to 15 years in prison because of a poem in which he said that all Arabs lived under similar free speech conditions as pre-revolution Tunisians.

But it’s not all doom and gloom.

A select few countries are making stilted progress toward establishing greater press freedom. Tunisia has retained its “partly free” ranking earned in 2011, despite a few instances of arrests and other actions against journalists. Journalists there are building a reputation for responsible journalism amid greater freedoms. The news from Libya is also cautiously optimistic with the country obtaining a “partly free” ranking in the 2012 rankings, due mainly to an inability of the government to control information at its former capacity as well as a provision in the draft constitution guaranteeing freedom of expression. Yemen still sits in the “not free” category of the rankings, but the country has seen some improvement and notably didn’t feature any journalists’ deaths in 2012.

Unfortunately, Egypt appears to be sliding back into the “not free” category. Journalists protested the death of Al Fagr photographer Al-Husseini Abu Deif, who died in a clash in December 2012. The Constitution passed by the Muslim Brotherhood also contains vague language that can be used to shut down media outlets deemed unacceptable by those in authority. The police questioning of television satirist Bassem Yousef over charges of insulting President Morsi and Islam is quite worrying. However, we should take heart that Yousef never went to jail and Egyptian public opinion appears to be wary of Mubarak-era tactics coming from a democratically elected leader.

In Egypt, a group of media outlets have formed the National Coalition for Media Freedom to fight for freedom of the press issues. Under Mubarak, such an organization would have been unthinkable. The group acts as a focal point for media freedom issues and the group often issues statements against abuses of individual journalists. Journalists in Tunisia have also acted in concert for media freedom, enacting a general strike in 2012 to protest encroaching government interference.

We shouldn’t expect a smooth transition from oppressive censorship to complete protection of free expression overnight. Hopefully, the periodic arrests in countries where we have witnessed unrest will lead to a greater awareness of the value of press freedom and help shift the opinion of prosecutors and the public on the futility of such actions.

In the countries that haven’t seen a change in leadership, none have embraced a change from the state-controlled communication model. For these countries, we may have to wait for political change before we will see any true gains in press freedom.

*[This article was originally published by Jadaliyya. An earlier Italian language version was first featured in the Arab Media Report.]