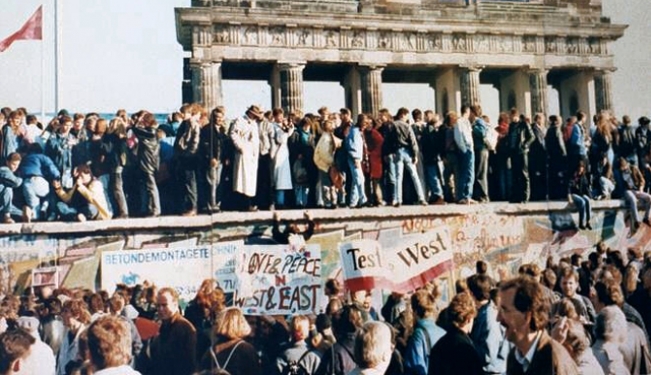 Documents recently leaked from the Russian Politburo and published in the UK, showed the concerns for British national security that the former prime minister, Margaret Thatcher, had regarding the fall of the Berlin wall and its potential consequences for the geopolitical balances of Europe. These fears of a unified Germany were also shared to a certain extent by the French and the Russian governments.

Was Thatcher right? Was she right to fear a unified Germany and its potential new aggressive foreign policy as a unified nation? in an article recently published by The Telegraph, historian Andrew Robert takes a clear position, saying that: “[…] yet simply because genuine British and French fears were not in the end realised, it does not follow that Thatcher was wrong in wanting to try to steer events more carefully and slowly than the great groundswell of German support for reunification in the event permitted”.

Even if this affirmation can be somehow true, it can’t be forgotten that since the end of World War II German foreign policy has been influenced by its own history.

Let’s step back for a moment.

In the decades which followed the end of the Nazi regime and the slow reconstruction of a German nation and identity, both the new role of Germany in Europe and the perception it gave to other countries have played a fundamental role in the decision-making process of  German leaders.

Even if the unification per se was probably the main goal, the majority of the decisions were characterized by some basic driving factors which are still influencing the way Germany currently plays its cards in the foreign policy arena; the same factors should also explain why past and present concerns have not been realized.

One of these drivers could be identified in the idea of rehabilitation. ‘Never alone and never again’ was an unspoken motto following the atrocities committed during the war. The proactive actions toward the creation of the EU first undertaken under Adenauer and later by other German chancellors could be an example of how Germany wanted to rehabilitate itself in the eyes of its new western allies. At the same time as the 1969 launch of Ostpolitik, Germany tried to re-establish a dialogue with the eastern European countries; for some, it was indeed this dialogue, coupled with the termination of the Cold War that indirectly aided the expansion of the EU 35 years later.

Strictly related to this rehabilitation factor was obviously a sort of normalization process in terms of how foreign policy should have been conducted. Germany felt the need to finally start being seen as a reliable and friendly partner and to be considered at the level of other major democracies.

Another important element of analysis is the German tendency to multilateralism. Here too, the ‘never alone’ motto bears witness to Germany taking decision and actions within a well-established international frame like the UN and/or NATO. This tendency to multilateralism shows a nation which is willing to never act alone and to always pursue actions under a well-agreed consensus.

Last but not least, Germany forged itself as a civilian power. This term identifies a particular foreign policy which promotes multilateralism (as just mentioned), institution-building and supranational integration (the creation of the EU), avoiding the use of force and using the power of diplomacy, and persuasion as the main tools of foreign policy.

Hence, European fears were not realized mostly because the main driving factors of German foreign policy decision-making drastically changed after  World War II and continued to be the same even  after the unification. The change was a direct effect coming from Germany’s own history and generated a drastic u-turn relative to  the past.

Germany became and continued to be a civilian power, working closely with its European allies and successfully avoiding the use of force.

During the last decade however, Germany has departed slightly from this position, accepting, in general terms, the physical participation in military interventions outside the traditional contexts of collective defence of the UN and NATO. In doing so, Germany was able to participate on an equal footing with Britain, France and Italy in the NATO/UN missions. It must be noted however that in this new environment, the use of force without a clear and direct mandate from a supranational institution remained unlikely. This new prospect, as expected, did not translate into a prompt and efficient action on the field, creating paradoxically in more than one case the opposite effect: approximately one and half years ago, the newspaper Der Spiegel reported how German ‘[…] special forces had an important Taliban commander in their sights in Afghanistan. But he escaped because the Germans were not authorized to use lethal force. The German government's hands-tied approach to the war is causing friction with its NATO allies. Unlike their Delta Force colleagues, Germany's KSK special forces are not authorized to use lethal force in Afghanistan except in the event of an attack.’

The real problem for German foreign policy now is that this shift in security policy is more on paper than in practice; the lack of funds to improve the efficiency of the Bundeswehr on one side (German governments seemed reluctant to commit to a full reform and to give proper financial help to facilitate the change) and the lack of governments’ will on the other hand (especially during electoral campaigns) are making  German foreign and security policy an uncomfortable question mark for its allies. The Treaty of Lisbon has created a new office dedicated to foreign affairs for the EU; questions are now being raised on what role Germany will play in this new framework.

Today, the European concerns on German foreign policy are different from  those during the Cold War. Concerns now relate more to the  type of role  Germany will  play in the new European External Action Service (EEAS) framework and within the European Union. Europe's evident inability to speak with one voice and the nature of pure civilian and peace-keeping missions of the EU make many wonder if the European Foreign Policy is purely a reflection of German preferences: a civilian power Europe shaped on a German style. It is very hard to say if that is really the case, because one should consider many other variables in this apparently easy equation; nevertheless, it might seem more than just a simple coincidence that the EU is walking on the same path as Germany.

Foreign policy however, is not only about military and security issues.

Foreign policy, especially in such complicated turf as the EU, is about also economic relationships with other countries. And here we can find the other element of concern which is coming from the clash between the pursuit of a common goal for the EU and the preservation of vital national interests for Germany. Energy policy and the relationship with Russia is a clear example.

The EU is pursuing an ambivalent strategy with regard to Vladimir Putin: if, on one hand, there is the need to maintain strong economic and political ties with Moscow, on the other, Europe cannot ignore the poor status of human rights and the Russian media’s lack of freedom. It is not an easy game considering that Europe is getting more dependent on Russian gas. To counter-balance this, the EU tried to face this dependency in two ways: first of all, by persuading Moscow to ratify the energy charter and in particular to sign up for  the Transit Protocol, which would allow access to itsgas pipes; a strategy that however seemed to have failed.

Secondly, the Commission is trying to push liberalisation and competition. Unfortunately, really little has been achieved in terms of mitigating the external position of each Member State?

A unified and strong EU policy toward energy (and then directly toward Russia) has been put at serious risk by national governments which want to keep the energy issue within national competence. Germany here played the major role to such a level that many commentators call it a ‘special relationship’ (borrowing with an evident lack of imagination, the same expression used to describe the transatlantic relations between the US and the UK).

As mentioned before, the Ostpolitik during the Cold War was a forerunner for what has become evident today: economic opportunities. These opportunities, both with the new eastern Member States and with Russia are huge, including the enormous possibilities that exist in Russia’s carbon and gas economy.  These are attractions that Germany is unlikely to leave untouched. This ‘special relationship’ is becoming a serious problem for the EU because the risk is that many other countries will follow the German example in trying to build similar relationships with Russia, in order to pursue vital national interests via more efficient bilateral deals than those achievable by the Commission (Italy is a perfect example with the bilateral agreement between ENI and Gazprom and the set up of new gas-line deals).

Germany is then somehow dividing Europe in its own terms (but other big European countries are doing the same on different policies), and it will be interesting to see where and how strongly the European Commission will stand in defence of the Union’s interests.

The European fear of Germany now rests not on how much of a threat Germany poses to Europe but rather on how firmly Germany believes in the European Union's best interest.