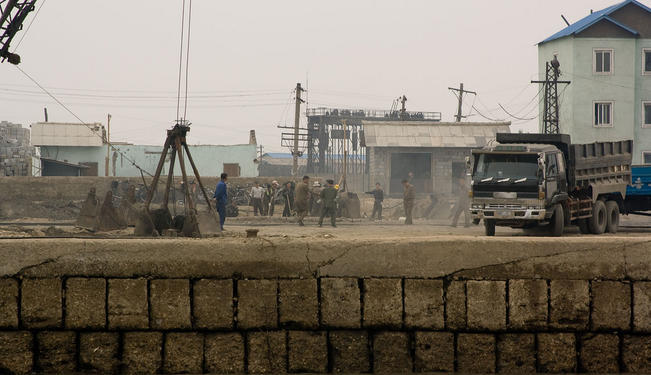 After his first of four cultural diplomatic trips to North Korea, Michael Bassett discusses the interplay of rhetoric and reality in the Democratic People’s Republic of North Korea. [View, In Picture: A Note From North Korea (Part 1)]

I thought it was going to be a great risk for me to visit North Korea as an ex-soldier in the United States Army who had been deployed on the De-Militarized Zone (DMZ). The riskiness of the trip seemed even more threatening because the rhetoric of tension between the DPRK and the US and its allies in the region had escalated to a boiling point during my visit. When I returned to the DMZ, this time on the North Korean side of the border, I was worried when I observed that there were no US soldiers within sight on the southern side. During my time deployed along the DMZ this would have been a sign that US military leaders in the region believed that war was imminent. As I would find out, however, rather than be a casualty of war, my time in North Korea was a fascinating journey of cultural diplomatic engagement.

North Koreans are equally frightened by war, and in their attempt to confront this fear, their rhetoric seems to the international community to be reactionary, visceral, and aggressive. The outside world is a scary place for many North Koreans; it is usually depicted to the average North Korean as full of enemies that seek the destruction of their country and families. North Koreans, in my experience, are not naturally inclined to war, and are instead almost “traumatized” by the threat of conflict destroying their way of life and independence. This fear fuels the DPRK government’s bellicosity.

The North Korean way of life, expressed in the juche ideology of self-reliant nationalism, is reinforced by Koreans’ historical memories of being brutally conquered, particularly by the Japanese during the early 20th century. It is the collective memory of occupation by the Japanese, and the North Korean fear of a re-ignition of another Korean War with all the mass destruction that it would bring, which makes it unrealistic that the North Koreans would surrender their nuclear weapons program. Nuclear weapons are, in the popular imagination of the North Korean public, the best and only deterrent to an invasion of their country. These fears aside, North Koreans are not adverse to unification, and in fact, signs all over the country proclaim “Independence, Peace, and Unification.”

North Korea’s strident emphasis on self-reliance and the ability to resist potential foreign invaders is contrasted sharply with the fragile state of the country’s economy. In driving around the countryside of North Korea, and not staying exclusively in the capital of Pyongyang where a tenth of the country’s population lives, I got a vivid look into the daily struggle that impacts the average North Korean. Sadly, many North Koreans are chronically impoverished and are daily confronted with severe infrastructural deficits that inhibit the country’s economic growth.

Infrastructure in North Korea is built by the Korean People’s Army (KPA), which uses the best material for monuments. As a result, a significant part of the country’s infrastructure and housing is built with weaker material, presenting a great risk to public safety. Bridges and apartment buildings throughout the country often have cracks in them. Apartment buildings and infrastructure in Pyongyang, the showcase capital city, are better maintained and are constructed in a more modern, if socialist utilitarian, style. Outside of Pyongyang, interestingly, North Korean homes adhere to a more traditional, Buddhist-style of aesthetics.

Throughout North Korea the socialist economy has deteriorated. North Koreans stated to me that the DPRK government supports the nutritional and educational needs of everyone until the age of 25, further creating dependency on the government for survival. Complementing the state’s active intervention in the North Korean people’s lives is the slowly growing presence of foreign firms and international organizations that, in cooperation with the DPRK government, employ North and South Koreans inside of North Korea. Wages earned by North Korean workers in these ventures are an important source of supplemental income that improves the relative position of some North Koreans while providing the DPRK government with a connection to the international community through trade. The most famous example of this type of partnership is the Kaesong economic zone, which was shut down on the first day of my visit to North Korea, stranding over 300,000 South Korean workers in the north. Ironically, South Korea’s major multi-national automobile corporation Hyundai operates several production facilities in Kaesong.

A majority of North Koreans know only their grueling day-to-day routine, which allows them to survive. Frequently, North Korean peasants are not generally aware of events that could affect their lives in the halls of power in Pyongyang, and the world outside of their country might as well be another planet.  The country’s rural areas face the most difficult challenges. North Korea’s countryside is filled with cornfields and rice paddies, and in mountainous areas with mines and ginseng farms. A majority of the country’s harvest is used for North Korea’s military, poised to repel invasion from the south, or exported to boost the country’s GDP. What remains of the harvest is divided for North Korea’s population and is accessed by ration coupons which are divided in equal proportion.

As I traveled further away from Pyongyang, basic utilities such as electricity and running water became scarcer. Rolling power outages lasting for several hours occurred a few times a day, and hot water was not widely available. Often, hot water is present only if it is boiled. Farm animals are rare and public transportation is minimal; I would frequently see farm labor walking in large groups over significant distance to work at their community co-operative farms.  Hospitals, present in every rural county of the country, lack modern equipment and suffer from the same lack of infrastructure as the people they were built to serve.

In spite of these challenges, North Koreans expressed genuine support for the Kim family and their government. The impression I received from my interaction with North Koreans is that regardless of state propaganda, which is pervasive, there was an underlying collective memory of being “stabbed in the back” by the outside world. North Korea’s history before Kim-il Sung, as expressed by North Koreans, was one of pain and trauma, and the only power able to restore their pride in being “Korean” was the government of the DPRK under the leadership of the Kim family. This visceral, public historical memory that strengthens the acceptance of North Korea’s government is difficult for the international community to understand and accept, but it is the most important facet of North Korean social life that must be respected in order for effective cultural diplomacy to occur between the DPRK and the outside world.

[Note: The views expressed in this article should not be construed as the official position of 361 Security.]