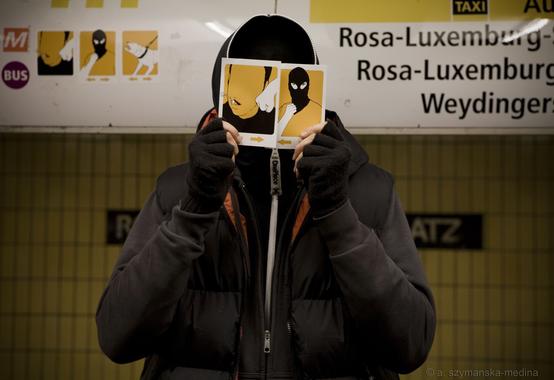 German street artist El Bocho talks about his latest project “Gewalt" and how he hopes to change society through art.

“Gewalt“ (German for violence) is the latest project of Berlin based urban artist El Bocho. He has been doing street art for the last 15 years and is well known for his poster technique. Despite being featured in galleries all around the world, El Bocho wants his art to be accessible to a wide audience which can only be guaranteed by putting it in the public space, for everyone to see. For him it is important to keep up a constant flow of communication with the audience and reflect the urban life in his work. “Gewalt” is a reaction to the artist’s observation of an increase in brutal violence especially in bigger cities. To make this problem more visible to the public he puts up signs and stickers in the streets that depict various forms of violence as a reminder of its omnipresence and some of them also commemorate past incidents. One of the signs for instance was put up at Alexanderplatz in Berlin where in October 2012 Johnny K. had been beaten to death by a group of young men. The design is kept in simple black, white and yellow and is not too graphic or detailed. This is because El Bocho wants his project to make a new access to the topic possible and differentiate it from the way the mainstream media deals with it. Instead of riding the moral high horse the artist wants to encourage discussion and create awareness for the problem of violence and thereby let people reflect about possible solutions themselves.

Originally I designed the pictograms for the German FAZ newspaper in 2009. After the events of the past weeks, I got them out again and made them ready for the streets. I don’t want to judge but I want to be present. People have to deal with their environment. These pictograms can be understood internationally and make it possible for everyone to deal with the phenomenon of violence in their own way.

2. How is the project connected to your other work?

For this project I’m using the same public space as for my other work, but this time I’m working with signs and stickers rather than my usual posters. What I like about the public space is that you can reach everyone, whereas in a gallery you only communicate with a certain part of the people.

3. Your signs and stickers are also attached close to real crime scenes. Do they also depict what has happened in those spots and are you not scared to hurt people’s feelings?

I don’t want to refer to what has happened too much. Also I don’t want to work in “potentially dangerous places” only. An exclusive residential area is just as much a place for violence as the tower block complexes at the outskirts of a town. It’s just that violence in some places is more visible than in others. Also I would never do an installation right in the spot where a tragic crime has happened. My art would then look too much like I was trying to make a kind of judgment. It would become too personal.

4. Officially it is not legal to stick anything to public walls without permission. Did you ever have any trouble because of that?

I never had any problems. I want to influence my environment in a positive way and I was always able to get that across to the police. Also I don’t do anything that causes permanent damage to the places where I do my art since all of it can be easily removed.

5. How are people reacting to the project. Has there also been negative feedback?

There is no name on the signs. I want them to look like official traffic signs. The campaign is very new and not as flashy as other projects, this is why there is not too much feedback. But if I think something needs to be done…I’ll simply do it.

6. Have you ever had any personal experience with violence and did they influence the project?

I grew up in a tower block complex and experienced a lot of violence, but I always thought that this is just part of the daily city life. Today with a little more distance, I can see how boundaries are easily being overstepped even with little offenses.

7. Supporters can buy T-Shirts and stickers and thereby become part of the project. How are people responding to that?

So far it is going great. Until now I did all my projects alone, but now I want to increasingly collaborate with others. Talk, go out, do art. Maybe I’ll upload the stencils for people to download them soon. Online feedback has been incredible, which also illustrates, what a pressing problem violence is.

8. How has the project developed so far and what are the future plans?

There will be additional themes in the future, also dealing with domestic and psychological violence. I’ll be touring Asia in early 2013 and hopefully create a buzz and in summer I want to pave cities with my violence posters all over.

More about El Bocho and his art can be found on his homepage.