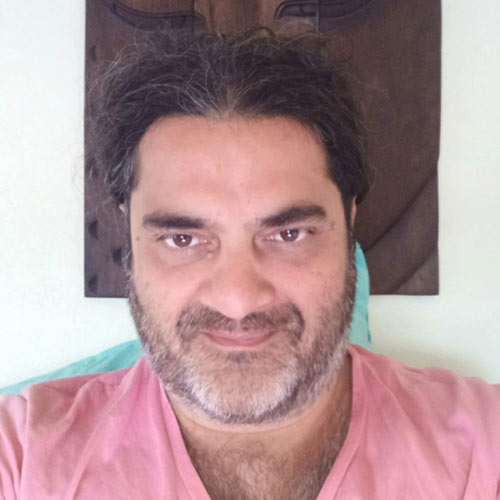 Vikram Zutshi is a cultural critic, author and filmmaker, dividing his time between the United States, Latin America and South East Asia. After a decade in indie film and network TV, as consultant to tech start-ups in California, a real estate developer, and later in international media sales/acquisitions, he went solo and produced feature films before transitioning into directing. His debut feature, 'Max Kennedy and the American Dream' has been globally broadcast. A prolific columnist, he writes for World Literature Today, Scroll, Quartz, Vice, Rolling Stone, The Wire, Popmatters, OpenDemocracy, The Diplomat, L.A Weekly, Times of India, The Hindu, Livemint and others. Vikram just completed two feature documentaries - 'Tijuana Dreams' about the immigration crisis at U.S-Mexico border, and 'Darshan', on the traditional arts of India and Nepal. He is currently prepping a fiction feature film.

A History of Indian Conservatism

At the time of independence from British rule in 1947, India’s first prime minister, Jawaharlal Nehru, adopted a mode of governance that came to be known as Nehruvian socialism. State control of industrial production and government interference in all spheres of life came to define this era and, indeed, the...

For as long as one can remember, the stunningly beautiful valley of Kashmir has been a tinder box of clashing ideologies and religious beliefs. In the not too distant past, it was known as the land of Rishis, holy seers who combined the profound philosophies of Hinduism, Buddhism and Sufism...

What “Indian Matchmaking” Tells Us About Love

When the show “Indian Matchmaking” dropped on Netflix, my initial reaction was one of revulsion. Matchmaker Sima Taparia and her clients represented everything I loathed about the culture I was born into. Of course, I was not blind to my personal triggers and biases, having grown up in a conservative...

When It Comes to Mental Health, India Remains Shockingly Misinformed

Indian journalist Manu Joseph recently wrote a column in which he questions major intellectual advances in history, claiming they were nothing but delusional ideas of schizophrenics. He asks, rhetorically: “What if many things that we call philosophies today had emerged from a mental disorder? What if influencers are influential chiefly...

Recently, I came upon a blog written by a well known yoga teacher by the name of Gregor Maehle. In it, Maehle berates Sharath Rangaswamy, a young Indian teacher who, as it turns out, is the grandson of the late Pattabhi Jois, founder of Mysore Ashtanga yoga. Several women had...

A Beacon of Light for India's Survivors of Domestic Violence

In 2016, India’s National Crime Records Bureau reported 338,954 incidents of violence against women, including 38,947 rapes, up from 309,546 in 2013. Forty percent of the victims were children. In the same year, only one-third of child sexual abuse cases brought to trial had resulted in convictions. What we are confronted...

Each year, the MIT Technology Review publishes a list of outstanding innovators under 35. They come from fields as diverse as biotechnology, robotics, artificial intelligence, nanotechnology, energy, the web, transportation, communications, materials and computer hardware. Their innovations are recognized as having the potential to provide solutions with global ramifications and...

“Namaste, brother” says Chaitanya, a pudgy, rosy-cheeked man from Charlotte, North Carolina, smiling broadly at me and my friend Alison. He wears a sleeveless orange tank top and white cotton balloon pants. He tells us the moniker was bestowed on him after an elaborate naming ceremony conducted on the banks...

Belonging to the Universe: Fritjof Capra in Conversation

In this guest edition of The Interview, Vikram Zutshi talks to physicist, activist and author Fritjof Capra. Fritjof Capra is an Austrian-born American physicist, systems theorist and deep ecologist. He has written many popular books that connect conceptual changes in science with broader changes in worldview and values in society,...

The Treacherous Border Crossing to America

Every day, dozens, sometimes hundreds of Mexicans from the poverty stricken southern states are smuggled across the treacherous Sonoran Desert into the US. We had been driving for 900 miles and close to 12 hours from LA, through the endless, arid and blindingly hot expanse of the Arizona desert. All...